The food should be easy to eat from a plastic plate in one’s lap without paying attention to it. It should not require a knife, fork, spoon or chopsticks. Sandwiches fulfill these criteria. Sushi can also be eaten with one’s fingers. Sandwiches should not be so thick that they have to be disassembled to fit in the mouth. Sandwiches should not contain ingredients that are difficult to bite through, for example prosciutto, non-crispy bacon, meat with tendons in it.
The food should not drip or stain the hands, especially with a greasy or otherwise difficult-to-remove sauce. Wraps should neither have the bottom cut off nor contain a thin sauce that leaks through the bottom. Sandwiches should not have contents falling out – avoid a thick stack of many fillings between the breads. A single filling can be thicker, e.g. a chicken breast. Biting into the food should not cause the food to fall apart (rice paper rolls have this problem) or something to squirt out the other end (as happens with sandwiches with a lot of sauce or mayonnaise).
Sandwiches should not require toothpicks to hold them together, because these are annoying to remove. Sandwiches should not be cut into pieces so small that they require toothpicks or that the filling falls out of all sides. The bread should not fall apart when picking up the sandwich.
Avoid ingredients with a strong, specific taste that some people love and some hate. Sauerkraut, pickles, olives, capers, kimchi, herring, anchovies, hot spices and fungal cheese are bad ideas. The food should be like a politician – trying to please everyone, avoiding controversy. Spices and sauces can accompany the food separately, like wasabi and soy sauce with sushi – then everyone can add the amount they like.
Crunchy food (nachos, potato crisps, toast) should be avoided, because the sound of chewing them distracts the audience and the shards may cut the inside of the mouth.
Nuts and small berries (raspberries, blueberries) are difficult to eat when one’s attention is elsewhere, because these tend to roll off handheld plates. Transferring very small food items like nuts and berries to one’s plate at the start of the seminar is also annoying, because these have to be picked up one by one or only a few at a time. To help people fill their plates easily, put nuts, berries and crisps in separate bowls or at least separate piles, don’t scatter them over and among other food. Nuts and small berries in particular are difficult to chase between other foods.
In general, keep different foods separate. For example, sandwich bread touching cut-up fruit tends to soak juice from it and get unpleasantly soggy and sweet. Cheese and dessert touching on the same platter leads to a cheesy-tasting dessert. Separating foods also helps allergic people avoid the triggering ones.
Remove the leaves from strawberries.
If bananas are slightly green, then they are difficult to peel, so a small cut should be made near the stalk from which the peeling can start.
Don’t cut grapes – it makes them go bad in hours. Whole, undamaged grapes keep for days at room temperature.
Fruit should be either in bite-sized pieces (melon, papaya) if there are forks to eat with, or whole so it can be handheld without leaking or staining (apples, bananas). A bad idea is to have long slices of melon that stain hands with juice and don’t fit in the mouth in one piece. If there are no forks, then cut-up kiwis, pineapple and other wet, slippery fruits are a bad idea, because these are difficult to hold and stain the hands.
One strange thing I have seen (and that should be avoided) is salad scattered among sandwiches, without any forks or other utensils to serve or eat it with. The only way was to eat the salad with one’s hands.
Portions that are too large for the average eater (footlong subs, whole chicken breasts) lead to food waste, because people eat only a fraction of the portion and throw the rest away.
The mechanics of eating the food is as important as the taste. The ease of eating of various forms of food can be field-tested in a seminar-like situation: eating sitting, with a small plastic plate in one’s lap, no table, only occasionally glancing at the food.
Similar points apply to stand-up reception food.

It will surprise nobody that real fighting or full-contact competition differs from movie fighting. What is perhaps less obvious is that the incentives for the actions are completely opposite. The actions themselves are not completely opposite, because movie fighting is supposed to look somewhat like a real fight, which constrains the difference between them.
An obvious incentive difference is the desire to hurt an opponent in a real fight vs not hurt a fellow actor. A more subtle distinction is that in a real fight or competition, nobody wants the opponent to see a punch or kick coming. In a movie, the flashier and more visible the attack and defense, the better. So in a real fight or competition, the movements are quick, preferably without wind-up by other parts of the body, mostly in a direct line from one body to the other (although some curved punches and kicks are used). The movements may be masked by feints, but these are subtle, like eyes flicking right while punching with the left. In a movie, the kicks especially move in long visible arcs, with the body turning 360 degrees in some cases, and not too fast. Every move is designed to be seen by the audience, which implies seen by the opponent.
In a movie fight, the techniques should not repeat, otherwise the audience gets bored. In a real fight, the only reason not to use one’s best move exclusively is the need to surprise the opponent. Only a few of the most effective techniques are used. Another reason for this is that real fights end quickly (not counting the posturing and shouting), so there is not much time to showcase a variety of punches and kicks. A wider range of moves is used in competitions, but still not close to the range in movie fights.

Many urinals are shaped so that if your centreline is aligned with the urinal’s centreline, then no matter where you aim, the spray splashes right back to your centre.

The solution is to stand slightly to one side, not directly in front of the urinal, but still aim straight ahead (perpendicular to the wall when viewed from above, not necessarily when viewed from the side). The urine starts flowing or splashing forward almost parallel to the wall of the urinal. This is the principle in a squash game – the more bounces off the wall, the slower the ball moves. If the energy for backward reflection is dissipated, then the ball falls down under gravity. The same applies to a urine stream – the more forward splashes off the wall of the urinal, the more energy dissipated and the more the urine flows downward. 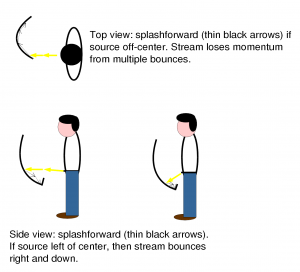