Spectacle shops try to sell customers more expensive lenses with glare-reducing coatings. Such coatings are often fragile, which benefits the sellers, because the glare-reducing lenses would need frequent replacement. Another way to reduce glare reflecting into the eye is to find its source and block it. For example, standard flat-lens eyeglasses reflect rays coming from behind and slightly to the side into the eye. If the light source behind can be eliminated, e.g. curtains drawn across a window, then the glare disappears.
There may be many sources of light that reflect from the glasses into the eye, for example due to multiple head orientations and light sources all around. In that case, blocking the light at the source is infeasible, but the rays causing glare can still be blocked closer to the eye. One way is to put side panels on the earpieces of the glasses. The side panel must touch the head with the edge closer to one’s back, so rays from behind cannot get between the earpiece and the head, so cannot reflect off the lens into the eye. The side panels can be cut from cardboard and slipped on the earpieces, as shown in the photo below. 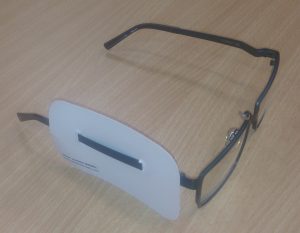 The side panels will also block unwanted light coming from one side into one eye directly (without reflecting off the lens). An example is the Sun shining through a window to the side, causing eye strain.

In both tabletop role-playing and computer games where players choose between different characters, some characters may be stronger than others when played optimally. This is undesirable in multiplayer games, because either most players will choose the stronger characters or some players will be handicapped by their weak character, which tends to reduce the enjoyment. Game designers spend time and resources “balancing” the game, i.e. changing aspects of the characters to give them all approximately equal strength. It is difficult to predict all possible ways a character may be played, so players may discover tricks that make a character significantly stronger than others. To counteract this, the game can be made self-balancing: the more players choose a given character, the weaker that character becomes. Then the discovery of ways to play a character better (giving additional strength) initially benefits the discoverer, but is neutralised with widespread imitation, analogously to innovative firms reaping monopoly profits initially from their patents, but eventually losing their competitive advantage to imitators.
The simplest way to self-balance is to subtract some measure of strength, e.g. health points, armor, attack points from the most frequently chosen characters. One in-game interpretation of this loss of strength to crowding is that each character channels power from some source (magic item, god, nature) and if more people channel a given source, then each of them gets less power. There are other ways to impose a negative congestion externality to achieve self-balancing.
One source of congestion-induced weakening is that in-game enemies (NPCs) fight better against characters they frequently encounter. This can be interpreted as learning (if the enemies flee before dying and later come back) or evolution (if the longer-surviving enemies multiply relatively more). In an evolutionary arms race, players pick characters that are strong against frequently encountered NPCs. NPCs vary in their resistance to different attacks and relatively more copies are spawned of those who last the longest under player attack.
Another congestion externality is a shortage of some resource that strengthens a particular class of characters. For example, equipment usable by that class may be in limited supply, in which case if many players choose that class, then they will find themselves under-equipped and weak. There could also be a shortage of materials for manufacturing the equipment, or a shortage of class-specific quests for gaining experience.
To make players (as opposed to NPCs or the game mechanics) the source of disadvantage to a frequently chosen class, the classes should have advantages over each other in a cycle, for example archers defeat riders, riders defeat swordfighters, swords defeat archers. In this case, if a class is frequently chosen, then this invites other players to choose another class that has an advantage over the frequent class, e.g. if many have chosen riders, then this creates an incentive to choose archers. Such a cyclical evolutionary dynamic has been observed in lizards (Rapid Temporal Reversal in Predator-Driven Natural Selection, Science 17 Nov 2006 Vol. 314, Issue 5802, pp. 1111).

“What if this bad event happens?” is a question used as a high-pressure sales tactic (for insurance, maintenance, upgrades and various protective measures). People suffering from anxiety or depression also tend to ask that question, which is called catastrophising. The question generates vague fears and is usually unhelpful for finding reasonable preventive or corrective measures for the bad event. Fearful people tend to jump on anything that looks like it might be a prevention or cure, which sometimes makes the problem worse (e.g. quack remedies for imagined rare disease worsen health).
A more useful question is: “What is the probability of this bad event happening?” This question directs attention to statistics and research about the event. Often, the fear-generating event is so unlikely that it is not worth worrying about. Even if it has significant probability, checking the research on it is more likely to lead to solutions than vague rumination along the lines of “what if.” Even if there are no solutions, statistics about the bad event often suggest circumstances that make it more likely, thus information on which situations or risk factors to avoid.
These points have been made before, as exemplified by the aphorisms “Prepare for what is likely and you are likely to be prepared” and “Safety is an expensive illusion.”

The (science) news cycle occurs when the original source is quoted by another news outlet, which is quoted by another outlet, etc, creating a “telephone game”, a.k.a. “Chinese whispers” familiar from kindergarten. Each re-reporting introduces noise to the previous report, so the end result may differ diametrically from the original story. This news cycle has been identified and mocked before, e.g. by PhD Comics.
The telephone game of news outlets has an additional aspect that I have not seen mentioned, namely that the re-reporting does not add random noise, but noise that biases the previous source deliberately. Each news outlet, blog or other re-poster has a slant and focusses on those aspects of the story that favour its existing viewpoint.
A single outlet usually does not change the story to the complete opposite of the original, because outright lying is easy to detect and would damage the outlet’s reputation. However, many outlets in a sequence can each bias the story a little, until the final report is the opposite of the original. Each outlet’s biasing decision is difficult to detect, because the small bias is hidden in the noise of rephrasing and selectively copying the previous outlet’s story. So each outlet can claim to report unbiased news, if readers do not question why the outlet used second-hand (really n-th hand) sources, not the original article (the first in the sequence). A single manipulator thus has an incentive to create many websites that report each other’s stories in a sequence.
The moral of this text is that to get accurate information, read the original source. Whenever you see an interesting news article, work backward along the sequence of reports to see whether the claims are the same as in the first report. The first report is not guaranteed to be true, but at least the biases and honest errors introduced later can be removed this way.

A restaurant chain can collect data on what food people like by examining the plates collected from the tables – the more leftovers given the size of the dish, the less popular the food. However, looking at the plates and entering the data takes time. It would be much faster to automate the process. For example, there could be a small conveyor belt for dirty dishes brought back from the eating area. The dishes would be weighed to record the amount of leftovers before scraping and washing. To detect which food was left over, one option is that a camera above the belt photographs the leftovers and then a computer tries to identify the food. This is a complicated machine vision and machine learning problem. A simpler option is to serve different dishes on plates with different shapes, or patterns such as lines and circles that are easily distinguished by computer. Then the plate identifies the dish for the camera, similarly to colour-coded plates identifying the price at sushi-train restaurants.
Even less costly in terms of computation (and without any camera requirement) would be to put RFID tags or other remote-id technology in plates. Each dish would have to be served on a plate with a dish-specific RFID, so the returned plates can be exactly matched to the food served on them. Each plate becomes more costly, but not by much, because RFID tags are cheap.
A single restaurant could also collect data on leftovers, but a chain of restaurants would get a larger dataset faster, thus useful information sooner on which dishes to keep and which to discontinue.

The accelerometers in phones can detect vibrations, such as when the car that the phone is in drives through a pothole. The GPS in the phone can detect the location and speed of the car. An app that connects the jolt, location and speed (and detects whether the phone is in a moving car based on its past speed and location) can automatically measure the quality of the road. The resulting data can be automatically uploaded to a database to create an almost real-time map of road quality. The same detection and reporting would work for bike paths.
Perhaps such an app has already been created, but if not, then it would complement map software nicely. Drivers and cyclists are interested in the quality of the roads as well as the route, time and distance of getting to the destination. Map software already provides congestion data and takes traffic density into account when predicting arrival time at a destination. Road quality data would help drivers select routes to minimise damage to vehicles (and the resulting maintenance cost) and to sensitive cargo. This would be useful to trucking and delivery companies, and ambulances.
A less direct use of data on road quality collected by the app is in evaluating the level of local public services provided (one aspect of the quality of local government). Municipalities with the same climate, soil and traffic density with worse roads are probably less well run. For developing countries where data on governance quality and spending is difficult to get, road quality may be a useful proxy. The public services are correlated with the wealth of a region, so road quality is also a proxy for poverty.