A half-year visit to a US university under a J1 visa requires US health insurance. In the University of Pennsylvania, the website of the International Students’ and Scholars’ Office says that they have pre-selected some health insurance plans. According to their cover description and comparison websites, these plans offer significantly less cover than similarly-priced plans not pre-selected by U Penn. My spreadsheet comparing the health insurance options is public. Possibly I have missed some aspects of insurance that justify the price difference. Another explanation is that the pre-selection was done by people who do not themselves use these insurance plans (because they are not visitors to the US) and have little incentive to make an effort to choose the best plan. A more negative and less likely interpretation is that the insurance company is providing incentives (such as kickbacks) for the selectors at U Penn to direct visitors to expensive low-cover plans that are profitable for the insurer.

Almost all real estate websites I have read are missing the essential information about a lease from their search filters. The core info is whether the property is available from a certain date to a certain date, whether the minimum and maximum lease lengths allow a tenancy for the specified term, what is the monthly rent for that term. Some websites specify that information in the description of the property, but do not allow searches based on it. On some websites, the rent doubles when the term is halved, which would be good to know from the start instead of after clicking on a search result.

If the property is only rented to a specific class people, e.g. requires a number of years of good rental history, a certain income level, etc, then it would be good to know this at the start of the search, instead of during the application process.

Almost useless info like hardwood floors, granite countertops, historic building, etc should be removed or relegated to the bottom of the page.

In general, any search website should allow the user to remove specific results (that the user has deemed irrelevant) from future searches, like Craigslist does. Being able to save the search like in Craigslist is also a useful feature.

Warning: this Christianity- and Christmas-themed post may offend or disgust. The procedure described is unpleasant for the receiver.

Fertilisation of an egg cell requires sperm to reach it, which does not require breaking the hymen. A thin tube, such as a hollow straw or reed, can be inserted through the small opening in the hymen to pump sperm (obtained via male masturbation) into the vagina. The simplest way to pump the sperm is to suck it into the straw with one’s mouth and then blow it out. Another way is with an enema pump (bulb syringe) that can be constructed with primitive technology: a hollow leather ball glued to a reed using resin, tar or bone glue. The seams of the leather ball can be waterproofed with tar. The ball can be made to spring back into shape after squeezing, e.g. by constructing it with wire hoops or springs inside.

The above method can be used to arrange a virgin birth in a primitive society. No miracles are required, although a virgin giving birth may be marketed as miraculous.

Modern in vitro fertilisation technology of course expands the range of ways to engineer a virgin birth.

If it is necessary to put cream on a burn frequently, then a band-aid is inconvenient, because it must be pulled off every time. Also, a band-aid may stick to an oozing wound and reopen it every time it is pulled off. If the damaged skin needs covering, for example because the weather requires thick clothes, then one solution is to stick or tie a small cup-shaped object on top of the wound. Tying is preferable, because removing a stuck object again irritates the damaged area. The edges of the cup should be soft, because these press on the skin (so a plastic bottle cap is a bad idea). One soft-edged approximately cup-shaped object is the eyepiece of swimming goggles. 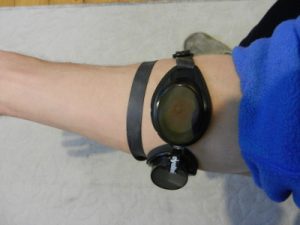 The eyepiece is nicely attached to adjustable straps for tying it on with neither too much nor too little pressure. The eyepiece may be flipped over to the side to get access to the damaged skin.

Of course, the location of the wound may cause difficulties in tying swimming goggles on top of it, e.g. on the torso. Even on the arm or the leg, the lengthwise movement of the sleeve or pant leg may push the goggles off, because the strap running around the limb does not resist lengthwise movement well. Then adding some bandages may be necessary.
Overnight, the area under the goggles gets sweaty. To avoid this, small air holes may be drilled in the eyepieces, which of course makes the goggles useless for swimming.

Commonly in hotels the room keycard has to be inserted into a slot for the lights in the room to turn on. An annoyance occurs when the lights are reset each time the card is removed and re-inserted, such as when leaving and re-entering the room (this problem and most of the subsequently mentioned ones are based on Courtyard by Marriott Chennai, but some are based on other hotels). Typically all the lights turn on and the unnecessary ones have to be turned off one by one. A simple and cheap microcomputer could remember the on-off settings of the lights and keep these until reset. Another similar problem is that the temperature of the AC or heating, as well as the fan speed, gets reset when the keycard is removed from the slot. Thus the AC has to be readjusted after each re-entry.

The keycard should work consistently, not require several attempts to operate the lift or open the room door.

It is a nice touch for a hotel to have a steam room, sauna or jacuzzi next to the fitness centre, but it would be even better if these were in working order and clean. Another nice touch is to provide slippers in the room, but if these are child-sized, then they are not very useful for an adult male. If there are two pairs of slippers in a room, then different-sized pairs would be reasonable and almost as cheap to provide as same-sized ones.

If (free) wifi is advertised, then it would be nice if it was working. Wifi problems can be detected automatically (by wifi-enabled devices placed in the corners of the hotel remotest from the routers) without waiting for annoyed guests to contact the front desk.

An electric kettle in the room is good for making tea, but placing glasses next to the kettle invites an absent-minded person to pour hot water into these, which cracks them.

The carpet should not shed hair that sticks to socks and anything else it comes into contact with (by floating in the air for example).

The fitness centres in hotels are typically less than 25 square metres. It is possible to choose machines and weights for a small room in such a way that cardio and all major muscle groups can be trained, but hotels seem to choose the machines randomly, e.g. three ellipticals and a stair stepper, but no rowing machine. Or two quadriceps training machines (leg extension and leg press), but no hamstring training machine (prone leg curl). This is despite the fact that quads are easy to train without a machine (do squats with or without weights), but hamstrings difficult.

A common problem in hotels is street noise in the room, which may be expensive to fix if the hotel construction quality is bad. One hotel in which the room was quiet despite a busy street outside was Sheraton New Delhi. A possible reason for its quietness was that the windows had two layers of packet glass, consisting of two or three layers each.

Hotel breakfasts should have a list of ingredients next to each dish, not just the name of the dish, especially when the name is unfamiliar to most visitors, e.g. the name is in the local language for a traditional ethnic dish. The list of ingredients would be especially helpful to people with food allergies, but the non-allergic would also benefit – it is easier to choose with more info. The ingredients in the list should be ordered, starting with the ones that constitute the largest percentage of the dish.

The arrangement of dishes at buffet meals should make it logistically convenient to get food, i.e. movement to and from the dishes should be unrestricted (no closely placed tables blocking the way) and similar foods should be located together. Sometimes hotels make strange food placement choices, for example I have seen soups and meat dishes alternate. Rydges on Swanston in Melbourne placed all the dishes in a small recess off the dining area, so there was a traffic jam of people trying to get into and out of that nook with their plates.

Made-to-order (live cooking) dishes at buffet meals could be prepared and distributed faster if their order system was computerised and the eaters could order the dishes from their smartphones. Peak demand time can be predicted and the cooking started in advance to speed up the delivery of the dishes. Such just-in-time production has economies of scale, so is especially easy for larger buffets.

The hotel room logistics are often strange, e.g. a narrow corridor leading from the door to the room, with wardrobes built into the side of the corridor. The doors of said wardrobes open outward, blocking the corridor. On the other hand, in the Chennai Marriott bathroom the shower stall and the the toilet were behind the same sliding door. To access the toilet, the door had to slide in front of the shower, and to access the shower, the door closed off the toilet. This would be annoying if two or more people stayed in that suite and tried to use the shower and toilet simultaneously, because both could not be behind a closed door at the same time.

Another logistical problem in both hotels and apartments is a toilet door that opens inward. When the toilet is small, the door almost hits the pot, making it difficult to maneuver around the door for entry and exit. Some toilets are so tiny that when sitting on the pot, the knees touch the opposite wall. In this case, it would be better to place the pot diagonally so the knees fit in a corner.

Two doors at the ends of a short corridor that both open into the corridor are impossible to open at the same time, which lengthens the time of passing through both doors.

Some hotels want to show how modern they are by replacing light switches with small touchscreens with LED backlighting. The little LED lights are numerous enough to somewhat light up the room when the ceiling and other lights are turned off. For sleeping, it would be good to be able to turn off the LED lights of the touchscreens.

If a motion detector turns on the light, then being able to switch off the motion detector and the light would be preferable. Sometimes the light is unnecessary, such as during the day with curtains open. The sudden bright light may also be annoying, for example when visiting the bathroom at night.