My uninformed speculation: vaccines may be so effective against Covid-19 (90-95% vs flu vaccine 70%) for the same reason why Covid-19 is so infectious – it binds strongly to biochemicals in the organism. If high affinity to the angiotensin-converting enzyme 2 on the surfaces of lung cells is positively correlated with strong binding to antibodies and immune cells, then the immune system, once triggered, removes the viral particles faster for those respiratory viruses that infect cells more easily. Strong binding and the consequent intense immune triggering may also be the reason for the life-threatening immune overreaction (cytokine storm) to the novel coronavirus.
This hypothesis could be tested on a cross-sectional dataset of viral diseases using some measure of the infectiousness of a disease, the effectiveness of a vaccine against it and the frequency of immune overreaction to it.
Infectiousness may be measured by ID50: what number of microbes makes half the organisms exposed to this number sick. This measure depends on the state of the organisms studied. For example, if people’s immune system is weaker in the winter on average, then ID50 measured in the winter is lower than in the summer.
Vaccine effectiveness is typically measured in percent – what fraction of vaccinated people are protected, in the sense that they do not catch the disease in circumstances in which unvaccinated people catch it. This measure of may depend on what the exposure to the disease is. For example, if a large enough dose of the microbe makes everyone sick, vaccinated or no, then exposure to this dose shows zero effect of the vaccine. Similarly, if a small enough dose fails to infect anyone, then the vaccine effect seems zero, but at least the lack of infections among the unvaccinated shows that no information about vaccine efficacy can be obtained from this exposure test.
Immune overreaction needs to be confidently ascribable to the disease studied for it to be a relevant measure for testing the theory about the connection between virulence and vaccine efficacy.

The paper by Qiao et al. (2020) in Science Advances shows that unicellular algae injected near a hypoxic tumour photosynthesise oxygen in the body in response to infrared light with wavelength 660nm that penetrates >4mm into tissues. The oxygen saturation of the tumour rises from 6.2% to 30% in 2 hours after the algae receive a 5-minute laser exposure. The oxygen sensitises the tumour to radiation therapy. No side effects were found from the algae in this or previous research. The performance of the algae stayed the same when these were coated with red blood cell membranes to delay their clearance from the body.

Another application of algae that can produce oxygen in the organism is doping in sports. The algae can be tattooed under skin that is exposed to light containing enough of the wavelengths which the algae use and which can penetrate under the skin. For example, long-distance runners outdoors in warm weather have most of their skin exposed to sunlight, thus have a large surface area suitable for algal oxygen production. The additional oxygen from photosynthesis improves athletic performance. The only question is whether the oxygen generation is quantitatively fast enough to make a difference. In elite sports, every little advantage counts, so athletes are probably willing to use algae tattoos.

The algae are not dangerous even in deep blood vessels and tissues. Eventually the organism clears the algae, but the clearance of foreign particles is slower in the skin than in deep tissues, as evidenced by the persistence of ordinary tattoos. So the algae will last for a daylong competition.

Patients with breathing problems, for example with coronavirus-induced lung inflammation, may also benefit from algae tattooed on a large area of skin which is then illuminated with 660nm light. Such oxygen supplementation reduces the need for mechanical ventilation. Again, the question is the amount of oxygen from a whole-body algal tattoo.

Creating a standing sound wave in the chamber in which CVD occurs may generate interesting patterns in the deposited film like on Chladni plates. A strong enough compression and strain induced by the wave may even change the crystal structure of the deposit. Maybe even form freestanding filaments through the volume of the chamber, not just a flat deposit on a surface.

Polycarbonate glasses (sunglasses, safety goggles) can be bent to better fit one’s head by heating the thermoplastic polymer with a lighter, gas stove or other heat source. Example photos are below. Polycarbonate is not flammable and tolerates repeated heating and cooling. The only problem is that the paint discolours when heated and the plastic buckles and wrinkles when bent, so the lenses should not be heated, lest they become unusable. However, for the handles, a better fit outweighs cosmetic appearance in many applications. 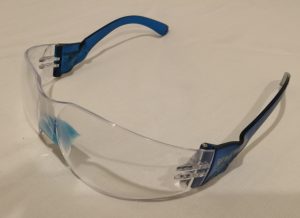 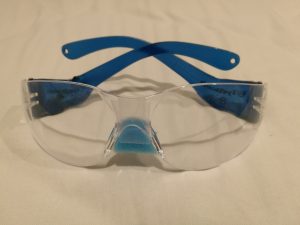 Many homes in the US have a switch to turn on the ventilation in a toilet or bathroom. Also, all kitchen range hoods and laboratory fume hoods I have seen must be manually switched on and off. Of course the ventilation could be run continuously, but this would be noisy, waste electricity and remove warm air (or cool air-conditioned air in hot weather) from the building. For toilets, bathrooms and kitchens, the main reason to ventilate the room is only temporary – removing odour or humidity.

An untapped business opportunity is to produce a switch that detects odours or humidity and turns on the ventilation just long enough to remove these. Humidity detection is easiest – just connect a hygrometer to the switch. Detecting smelly gases such as grease vapour in the kitchen, hydrogen sulfide, methanethiol and dimethyl sulfide in the toilet may require spectrometry or a chemical reaction. Laboratory gases are probably the most difficult to automatically detect due to their variety.

There are at least four ways in which an eater may have less energy and nutrients after consuming a food: mechanical, chemical, physical and biological. The mechanical way is that chewing and other parts of digestion take energy, so if a food requires serious mastication and contains few calories, then more energy may be spent than absorbed. This has been claimed for raw celery.
Chemically, one food may react with another in a way that makes one or both of them less digestible. The less effective absorption reduces the nutrients obtained compared to not eating the second reactant. The chemical pathway to inefficient digestion may have multiple steps. For example, ascorbic acid leaches calcium from the body, and calcium is required for the absorption of vitamin D, so eating more citrus fruits may indirectly reduce one’s vitamin D levels.
When calculating the calorie content of food, indigestible fibre is subtracted from carbohydrates before adding up the energy obtained from carbohydrates, fats and proteins. However, if fibre reduces the absorption of calories (in addition to its known reduction of the absorption iron, zinc, magnesium, calcium and phosphorus), then the food’s bioavailable calorie content is less than that obtained by simply subtracting the fibre. To derive the correct calorie content, the fibre should then have negative weight in the calculation, not zero. This difference may explain why in Western countries, a high-fibre diet predicts better health in multiple dimensions in large prospective studies (Nurses’ Health Study, Framingham Heart Study), controlling for calorie intake, lifestyle and many other factors. If the calorie absorption is overestimated for people eating lots of fibre (because the calorie intake is larger than the absorption), then their predicted health based on the too high calorie estimate is worse than their actual health. This is because most people in Western countries overeat, so eating less improves health outcomes. If the predicted health is underestimated, then the high-fibre group looks unusually healthy, which is attributed to the beneficial effects of fibre, but may actually be due to absorbing fewer calories.
A food may chemically break down tissues, e.g. bromelain and papain, from fresh pineapple and papaya respectively, denature meat proteins, so cause mouth sores. Rebuilding the damaged tissue requires the energy and nutrients, the quantity of which may exceed that absorbed from the food.
Chemically causing diarrhea reduces the time that foods (including the laxative agent) spend in the gut, thus reduces nutrient absorption.
Stimulants like caffeine speed up metabolism and cause greater energy expenditure, but may give zero calories themselves, resulting in a net negative caloric balance.
Just like chemical damage, physical injury to the body necessitates spending calories and nutrients for tissue repair. For example, scratchy food (phytoliths, bran) may cause many microscopic wounds to the digestive tract.
Cold food requires the body to spend energy on heating, so if the calorie content is small, then the net energy obtained is is negative. Examples are ice cubes and cold water.
A food substance may physically partially block the absorption of another, for example a gelling agent (methylcellulose, psyllium husks) may turn a juice into a gel in the gut and thereby reduce its absorption. Based on my personal experience, psyllium husks gel liquid feces, thus effectively reducing diarrhea. Mixing psyllium husks with carrot juice and with asparagus powder 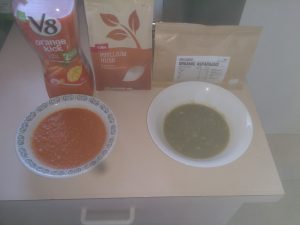 dissolved in water before consuming them during the same meal results in the excretion of separated faint orange and green gels somewhat distinct from the rest of the feces (photos available upon request, not posted to keep the blog family-friendly). This is suggestive evidence that the gelling agent both kept the juices from mixing in the gut and reduced the absorption of the colourful compounds by keeping the juice in the centre of the gel away from the intestinal wall.
Biologically, a food may reduce the nutrients available to the organism by causing infection, the immune response to which requires energy and depletes the body’s reserves of various substances. Infection may lead to diarrhea, although the mechanism is chemical, namely the toxins excreted by the microbes. Infection with helminths (intestinal worms) that suck blood through the wall of the gut requires the replenishment of blood cells, which uses up calories, protein and iron.
If the food takes a long time to chew or is bulky, then chemical and electrical signals of satiation are sent from the gastrointestinal tract to the the appetite centre of the brain. These signals reduce the desire to eat, thus decrease calorie intake.

Vol 5, 6 collect the recipes from the other volumes and add more.